In 2016/2017 she is awarded the one year residency at ISR Swiss Institute in Rome, and is taking part of Swiss Art Awards in Basel. In 2013, she was awarded the Société des Arts grant and the FCAC-Geneva grant and residency in NYC. In 2009, she first participated to the Swiss Art Awards in Basel and received the Swiss Art Award. The artist’s first bilingual monograph «Paramnesia» was edited in 2013 by SAV-Fondation Ahead in Geneva (70p, fr/en, texts of Christophe Kihm and Elie During, Marie Villemin and Marie-Léa Zwahlen). In 2021 her second monograph is launched ; « Echos » edited by Casa Grande (331 pages, English/French/Spanish/Italian, texts by Cristóbal Barria, Mark Lewis, Beau Rhee, Lucille Ulrich, Valeria Venditti). She’s represented by gallery Laurence Bernard in Geneva. 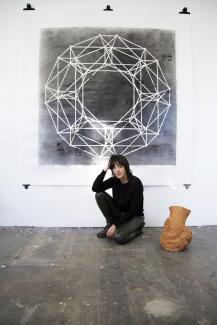